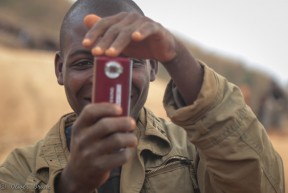 With a good friend of mine, we went to Eastern-Congo to film a documentary about Coltan. Coltan is a mineral that is found in eastern Congo and used in electronic devices like our cellphones. It mostly mined in illegal mines, and for decades different rebel groups are fighting for those mines, to cell the minerals and afford new weapons. We wanted to show the effect that those mines have on the people living in the East of the democratic republic of Congo. I flew into Kigali in Ruanda, drove from there to Bujumbura in Burundi and crossed the border into the DRC. From the first minutes in you could feel the history that is still influencing the whole area.

Our Taxi Driver Eddy and many people we met had huge scars in their faces. Eddys family was killed in the genocide that happened in 1994, just his brother and him survived after they the hit him with machetes on their heads. It was a racist fight between Hutu and Tutsis that is still very actual and recent today. After two days of trying to get a Visa in Burundi I had to buy at the boarder to Congo and could finally enter the country. The first day there we went with an organization into a community up in the mountains. 25 Villages belong to this community that live by mining. Together they protect each other and try to hide that they have mines. We met the elder of the community and he invited us to talk to people and visit one of the mines. 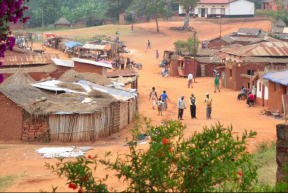 So we walked out of the village down a very steep Hill and so a small area that was cleared out of all trees and plants. There were around 200 hundred people sitting outside being tired, carrying heavy bags on their heads or walking towards one of the small holes, with a lamp and a hammer. We met a 15 year old boy that worked in the mines for about two years and we asked him to show us where and how he is working. So we climbed down one if the tunnels that were hit int the stones and secured by wood. We climbed down the many 3 foot high steps until we came to place where a couple of people were cutting down minerals with an hammer. For about 45 minutes we were down there interviewing people and filming them while they were working. Still after 45 minutes we got to know people that were coming out of one of the small wholes that were leading into our tunnel.fter they cut those minerals out, they carry them up those steps and up the steep mountain.

Coltan has a very high specific weight so the bags are very heavy. For one of those backs they get between 2 and 5 dollars and it weights about 100 pounds. On the world market Coltan was dealt with 100-120 Dollars for one pound. In the last years the president of Congo released a law that probated exporting those minerals into other countries. The law was made to make sure that rebells can not sell minerals and buy weapons. But ah huge amount of the people lived direct in related to the mining, so that the area lost their main support.

The village brings the coltan to Bukavu, a city further north on there border to Ruanda. From their the Coltan is brought across the border and sold as Ruandan Coltan into all the world for a lot more then what the miners in Congo get. 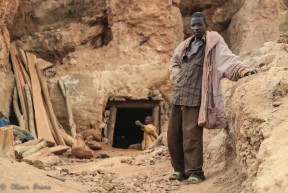 In Uvira the city we stayed in first I got to know the commander of the UN Soldiers from Pakistan that are stationed there. He showed me pictures that were taken out of the helicopter that showed huge mines, with land stripes to land with an airplane. And no one can follow where those planes are flying to. They have boats on the lakes, that make sure that no weapons are getting into the country, but no one knows and cares where they get the money to buy those weapons. But the hardest part we still had to discover. There is lots of places in this world that are rubbed of their minerals or other treasures, but just a very few where that has such a bad influence on the people living around. Back in the hotel we heard that a couple of rebells went into one of the villages that we drove through, rubbed people and raped woman. We interviewed a couple of woman that lived in a village close by.

They told us there story of how their husbands were killed and they were raped by several soldiers. Often there are denied by their communities and there is a whole generation of children that are there because of rape. Hated by there parents are they in danger to become the next generation of rapers. Moved by what we saw and heard we moved on and drove up north to Bukavu and from there across the beautiful Kivu-Lake to Goma. Goma is the capital of the Region called Kivu and is on the boarder to Ruanda. During the genocide in 1994 millions of people fled from Ruanda into Goma. With those people and families that came, a lot of the aggressors of the genocide came to, and can´t go back because they would be accused there. 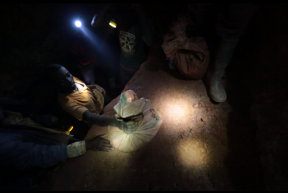 So the racist fights between Hutus and Tutsis that started 1994 are still there and part of the problems. Adding to that a vulcano exploded a couple of years ago and a huge stream of lava ran through big parts of the city. A couple of days before we car into Goma the situation of the city got way worse. Part of the Naitonal Congolese Army split and got to gather with different Rebell groups, forming a new group called the M23. There is no real specific goal that this group has, but people that we met there knew, that it is all about those mines. The goal is to gain control over those treasures and over Goma the most important place in exporting those minerals. What nobody really wanted to say but knew is that this groups are strongly supported by Ruanda and Uganda. The worst part of all this is to see, experience and hear about the things, that civilians have to suffer. At one of orphanages that Jean was running we met a boy, that was eleven years old. We met him in one of the rooms, that the more then 20 boys shared with each other, and when he followed us out into the sun, we his huge scar in his face and across his head. He told us that rebells came into his village and killed his parents, and injured him heavily with a machete. They assumed he was dead and left him in their house. Neighbours found him and brought him into Goma. The thing is that this happened when he was three months old. 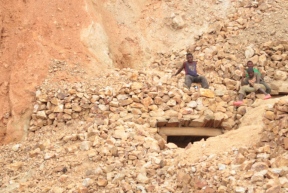 We met a men called Jean that is leading NGO in Goma. He was exhausted and burned out by the situation that he is facing. Thousands of people flet from the villages into Goma especially Children, to find protection from the M23. The last weeks before we came the recruited a lot of people and especially children. The next couple of days were some of the hardest I had. We met of mostly woman and children that suffered similar things. It was unbelievable what happened to not just enemies or soldiers, but to children and woman. We met 15 year old mother, Elisa, that was held by rebells and was considered as the wire of six soldiers. She does not who of those six is the father, but when she pregnant they kicked her out and used another girl. She told us about how she was raped, but our translator had to correct himself. It was not her, it was her sister who was 3 years old. It is just a couple out of thousands of stories that are out there, and that people had to live with.

While we there and focusing on filming, interviewing and capturing those stories it did not move me that much. But since I am back and reflecting back on my time in congo, it brakes my heart. To see what happens to innocent people is incredibly hard to see. But also to see how broken a man must be, to do those horrible things to children and even infants. It is very hard to not loose faith in people and to accept what people are able to do to each other.

But at the same time I am overwhelmed by what people can go threw and still have strength and joy. When we came to one of the facilities where some of the woman lived that we met, we were welcome by a choir. All the woman were singing together. They just had a couple of drums and there voices but it sounded so beautiful. Even in the interview we could see such a strength in people, that are not giving up hope and their lives. For the documentary we were surprised by how hard it is to work effective in Africa and the current situation. We could not film as much material as we needed and wanted but we still hope to get some of our material and stories into the News. 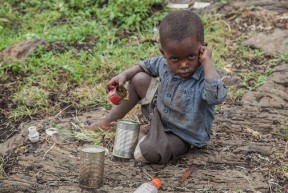 Micha Challenge will have Coltan as their years topic in 2013 and will make a trailer for them. We hoped that through those different offers we could get the money in, that we spent. The higher Visa costs, and the camera we had to borrow are probably the reason, that this will not work out.Coltan and the minerals in East Congo have huge influence on the situation of the area. Those minerals are used in Kivu, most people we met did not even know what they are made for. I want to challenge our thinking that always need the newest cell phone or electronic equipment. Not buying any minerals does not help Congo ether and a solution would be to control the mining and make Coltan available that comes from secured Mines.Thank you so much for all your support and interest in this topic and my journey. It was very encouraging and good to know that you were there