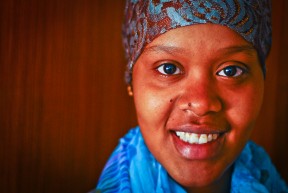 Hiba was born in Somalia and lived in Mogadishu with her family. Somalia has been under a civil war for years now. About six years ago, the family saw the need to flee Somalia. They paid a trafficker to bring them to Europe where they could gain refugee status. With fake papers, they flew to Dubai and from there to Nepal. The trafficker brought them to a hotel promising to pick them up the next morning to continue their journey to Europe. But he never came. The family was trapped in a country where they did not speak the language, they had no money, and were in possession of fake papers. Nepal did not recognize the family as refugees, but as illegal immigrants, and began charging six dollars for every day they had been in Nepal. This began six years ago. They were not allowed to work, study or leave Kathmandu (The Capitol of Nepal). America and Canada issued them visas, but Nepal was not willing to let them go as the government did not want to let go of the money the family “owed”.
When I met Hiba, there were 78 people from Somalia in Nepal. They were all able to enter into the country legally, until Nepal changed the law and would not issue Visas for Somalis any longer. Nepal solved the problem of Somalis being trafficked in, but gave no rights to the Somalis who had already been trafficked into Nepal. Even children born in Nepal to those trafficked into Nepal were charged six dollars a day, from the day they were born.